Hi there, my name is Arvin Kaushal and in October 2015, I was diagnosed with six brain tumours. I wasn’t scared at all when I found out, due to the support  of my family.

So how did I find out about this? Well in June 2015,  my mum and I got involved in a car accident, where I somehow managed to rolled over my car on the Coventry Ring road.

The paramedics took both of us in and we had a full body MRI. I was home on the same day, however my mum was in the hospital for a week with a fractured spine. Unfortunately it wasn’t the last time one of us would spend a week in the hospital.
A couple of months later, I got called back into the hospital for a MRI on my head. A couple of weeks after that, I found out that I had 6 germinoma tumours in my brain. They were scattered all over the brain including the optic nerve and the Pituitary gland.

Before my first radiotherapy session, I had lunch with my best friend. We’ve been friends since nursery. I told him about my diagnosis and that was the last time that he spoke to me.

On the 8th, I had to lie down on a table, take off my jewellery, empty my pockets, put my mask on and lie down in a machine for about 20 minutes. I had to have 2 lots of sessions. One for the overall head and the other on the Pituitary gland. I started my second radiotherapy session in 2016. For some reason, I got constipation from radiotherapy.

My hair started to fall out on Christmas night and on Boxing Day, as I was going upstairs, I fell down. Luckily, my foot got caught on the banister.

My treatment ended in February and I was told by my consultant to slowly come off Dexamethasone. In March, I went into hospital for 10 days, with a fluid blockage from my brain. I don’t actually remember anything from those 10 days, apparently I asked the doctors, why doesn’t a table come out of the bed?

I had forgotten everybody, but I remember that I had this one nurse who never left my side. I then remembered that it was my mum. My mum ate with me, slept on a chair next to me, she did everything for me during my time in the hospital.

I now refer to those 10 days as a holiday. To fix me, they had to fill me with steroids, which gave me massive weight gain. From 70KG to 114KG. Here’s a picture from 2016 at my birthday. 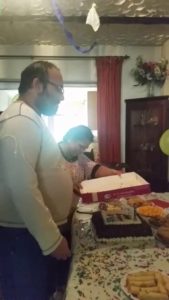 Before my diagnosis, I was drinking a lot of water and going to the bathroom a lot. I mentioned this to my GP and he told me that I was low on Vitamin D. I mentioned this to my consultant and he referred me to another department at the hospital, where in May 2016, I was diagnosed with Diabetes Insipidus, because I had a tumour on the Pituitary gland, this gave me Diabetes Insipidus

So, how am I doing today? 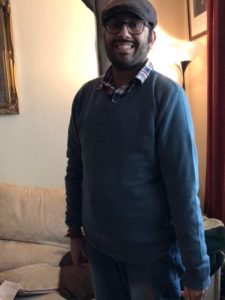 I’ve been going to the monthly Brain Tumour Support and MacMillans meetings since March last year it’s really useful to be among people in the same boat as yourself. I’ve started playing the ukulele again  I originally started playing the ukulele back in 2012 but I stopped playing when I was diagnosed. The only two reasons why I started playing again was because I spoke to Sam from the Coventry BTS group and she said that I need to sing and be happy. I only sing when I play the ukulele. The second reason is because I was having lunch with an old work colleague called Joe. He came up with three habits to do everyday and one of them was to play the ukulele. My ukulele playing is getting to the point where I’m going to playthe ukulele to the Coventry BTS in the new year.

I got an Apple Watch for my 28th birthday in 2016, and since then I’ve lost over 35KG. In September, I’ve started using a hyperbaric oxygen chamber.

The chamber is promoted to fix whatever Radiotherapy and Chemotherapy does to the body. Although I’m seeing and feeling improvement, I am getting headaches from the tablets that I’m talking. The tablets that I’m taking are hydrocortisone, desmopressin, levothyroxine and omeprazole.

I found out about the HBO through Carers Trust, where I’ve been volunteering for about a couple of months. Although it’s for an hour, because I get tired, I have been slowly increasing my time every time I go. In the new year, I’ll be doing two days a week but for an hour each time.

So why am I writing this? Well for a couple of reasons. Firstly, I’ve been quiet online since my diagnosis. Secondly, I felt that my story had to be told. If not a place for me to rant, but a place where I can help others. Finally, I was inspired by a show that was part of Channel Four’s Stand Up 2 Cancer called Fighting Cancer: My Online Diary where two people were suffering from brain tumours.

Next month, I will go into more detail into how I lost that weight. Please feel free to leave a comment and if you buy something from Amazon by using the link on the page, 100% of all the money that I get from Amazon will go to Brain Tumour Support.The Amazon scheme works like this, if you click on the link below and buy something from Amazon, a percentage goes to Brain Tumour Support. The rates are different to what you get. The rates are the following:

Thanks, and I will see you soon.